“There's always room for a story that can transport people to another place.”
​-J.K Rowling 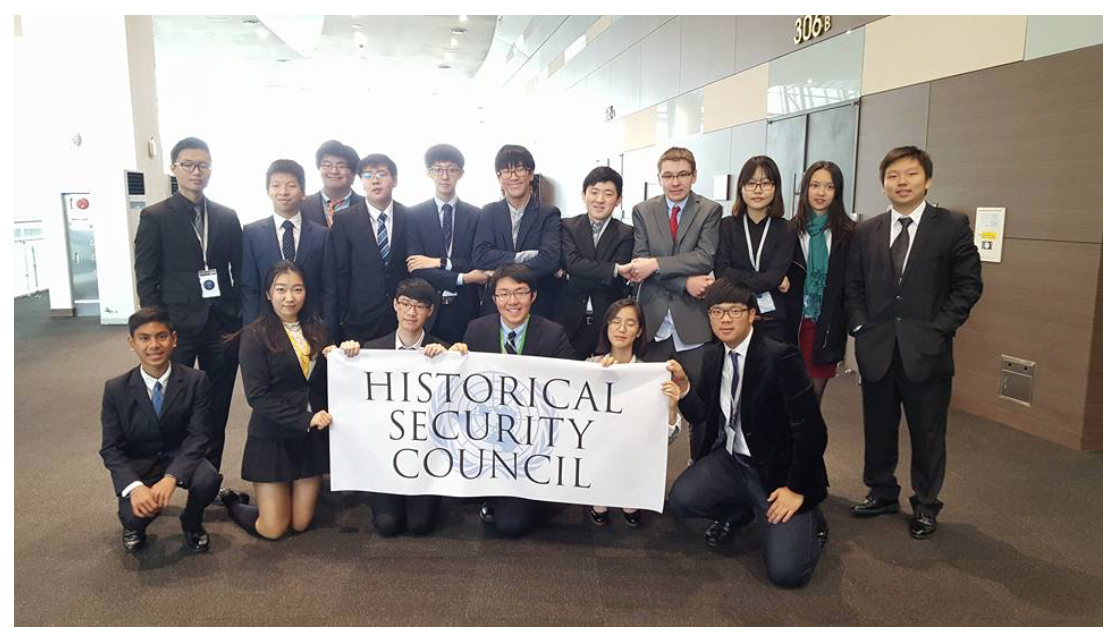 From November 22nd to the 26th, the KIS Jeju MUN team travelled to Ilsan in order to participate in the 19th conference of SEOMUN. SEOMUN, one of the most prestigious MUN conferences in Korea, brings in many different international schools not only from Korea, but also Singapore, China, Malaysia and other countries in Asia and Europe. Although the debate didn’t begin until the 23rd, the delegates all arrived in the KINTEX convention centre in Ilsan on the 22nd and it was clear that the different groups of delegates from different parts of the world truly highlighted SEOMUN’s theme for the year: Embracing Diversity.

The first day was packed with head-racking dilemmas for everyone as we tried to strike up deals and mediate conflicts while drafting our resolutions. I found myself in quite a lot of trouble as the United States of America due to the United States being heavily involved in all the 3 issues. As the time period was set in the height of the Cold War, all issues were basically proxy wars caused by the USSR and the US. My first priority was to get rid of any potential enemies, in this case, it was the communist countries. I managed to actually become acquainted with the delegate of USSR and ensured peace to help our committee. The first day ended with the committee finishing drafting resolutions and debating on the perambulatory clauses of the Cyprus question.

The next day saw the end of the cyprus question come quite quickly as it was smoothly debated and voted upon. The first obstacle came when discussing the second issue: the Indo-Pakistani war. The overview of the issue was that the Pakistani government had so oppressed its people that the Bangladeshi people rose up in rebellion and gained independence with India’s help. The US had historically supported Pakistan, even though they had committed a massacre of their own people, and thereby, I had to play the role of a self-opinionated delegate that refused to take in advice from any other delegate. This actually proved a hard task as I was forced to deny the existence of any massacre happening in the Indian subcontinent and was forced to fight against fellow NATO members and the rest of the world with only Pakistan by my side.

This issue was too heavily disputed that it took almost all of the second day and the committee had to suspend debate and move onto the Apartheid issue first. This issue was also debated quite smoothly as the committee tried bringing Apartheid to end and implementing policies that promoted racial equality, but in the end, saw the resolution fail due to simple majority. The committee was then forced to fight again as it couldn’t reach a consensus on the issue. The conflict in the committee was the date of a referendum: Before independence or after. The pre-independence faction, USA , Pakistan, Syria and their friends argued that this would ensure that the Bangladeshi people would get a chance to experience a reformed Pakistani government while the post-independence, USSR, Italy and their friends argued that the Bangladeshi people were tormented enough and deserved independence and could rejoin Pakistan later if they wanted to. In the end, the resolution read that the referendum would happen after independence and the committee went into final voting procedure. Now, the real question was would the US veto the resolution, thereby preserving their national stance and interest, but destroying the efforts of the committee for 2 days and seeing a breakdown in diplomacy during the cold war. I chose to abstain from the voting procedure. Fortunately, the resolution didn’t pass due to super majority and the committee ended with only the cyprus question being resolved.

Overall, the Historical Security Council of SEOMUN XIX was one of the most interesting MUN committee I’ve ever been a part of. It was action-packed and although we faced many conflicts throughout the committee, everyone was guided by reason and judgement from their perspective and brought interesting points into the debate. Our committee also saw the temporary end of the cold war between the United States and the USSR as the two countries were able to mediate between conflicts of other delegates and found middle ground, ending up with the bromance couple of the committee. Truly, SEOMUN XIX has rewritten the history of the world and has also rewritten MUN in my life. I was reminded of why I joined MUN in the start. Not because I had to have something to write in my college application, but because it gave people an opportunity to discuss realistic policies to real-life problems with colleagues who were also equally interested in the subject as you are. These kinds of opportunities does not usually come for people as everyone have different interests, but MUN provided me with these kinds of experiences and I believe it will continue to do so.

On February 17th, the high school boy’s and girl’s basketball team traveled to Busan for their final KISAC in this year. Hosted by BIFS and BFS, the boy’s team played at BIFS and the girls team played at BFS.
The girls’ first game was against BIFS, one of the strongest team in KISAC. Because they all knew that their first game was going to be very challenging, the girls were more nervous and desperate. Even though girls were worried about their first game, the girls beat BIFS by 10-15 for the first time in KIS history. This victory cheered the girls up. However, the girls lost their next games to NLCS and BFS. The scores were very close, which made the girls even more disappointed. However, they felt they had played their best this season compared to before. The experience this year was unforgettable for all the girls on the basketball team.
After, the girls finished their games at BFS, they headed to BIFS to watch the boys’ championship with NLCS. When they got there, they heard that boys had played 3 games in a row, which made coaches and athletes worried about their players. Despite the fact that the boys were very tired, they played really well and earned 1st place.
Well done to the boys and girls who played in KISAC!